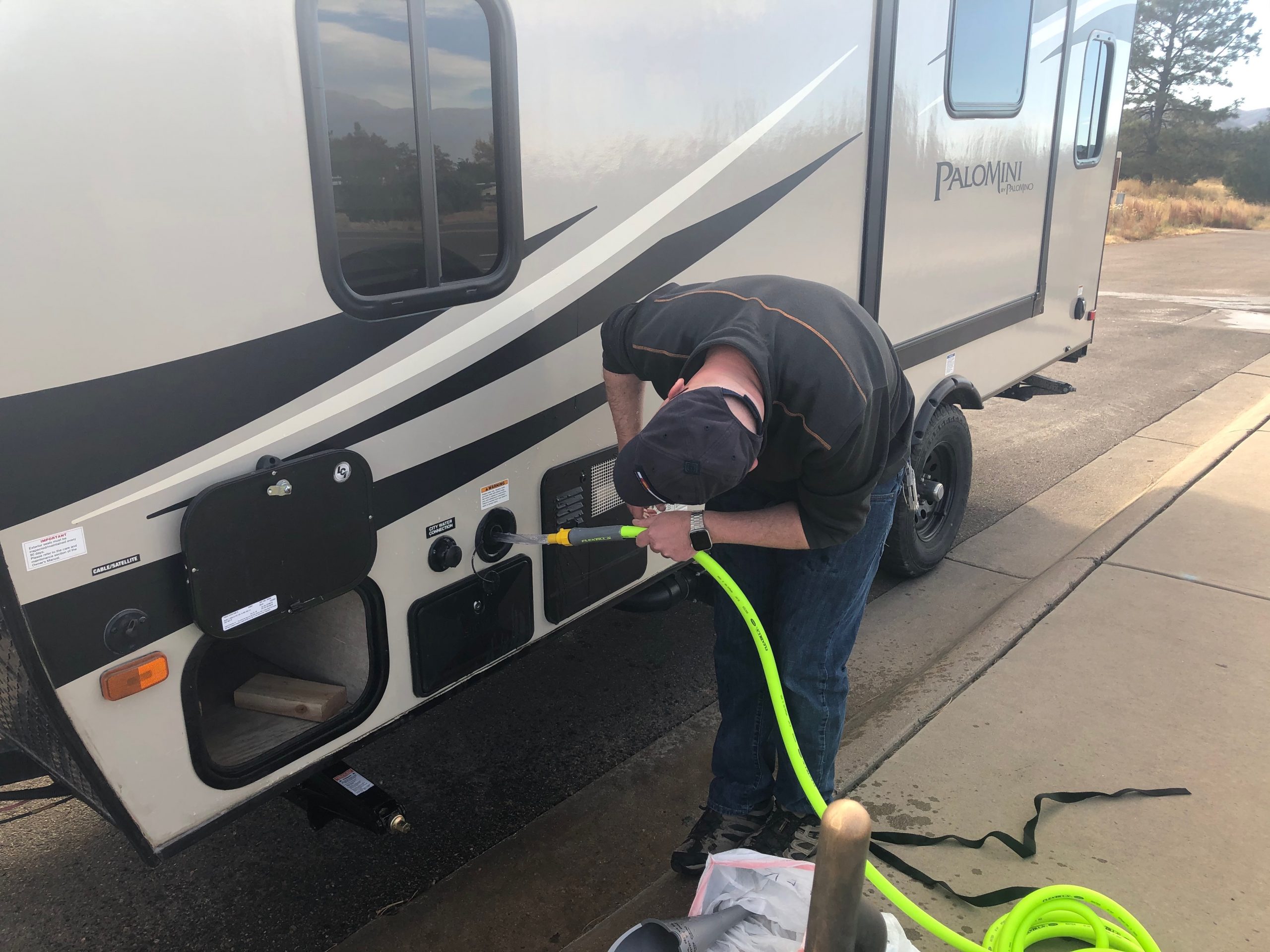 Patricia’s been doing the heavy lifting on blogging our adventures but I thought it was high time I contribute.  Being the more retired of the two of us, I’ve been doing a lot of the mechanical work on Bojack…and besides, it’s the kind of work I enjoy.  I’ve been learning as many of the systems as I can in hopes of being a more informed RVer.  In FAA ground school I learned all about my airplane’s systems so that I was more prepared for what could happen in the air, so I figured the same principle applies.  Well…yeah, kinda…and not really!

I read about and watched YouTube videos about the three main water tanks on the RV…the “black,” the “gray,” and the “freshwater.”  Of course, you already know that the black tank is the sewer tank and the freshwater is the good stuff that comes out of the sink faucet and showerhead.  It’s also used to flush the toilet (we have a marine-style toilet, identical in design to the one we had on our sailboat growing up).  The gray tank is where the shower water and sink water drains.  Now, your RV should have a gauge to tell you the relative levels of your tanks.  You should also know your tanks’ capacities.  For Bojack, it’s 19 gallons of fresh, 30 gallons for gray, and 30 gallons for the black.

Here’s what I forgot…  The water heater has a 6 gallon capacity (and to be honest, I didn’t know the capacity beforehand…way to prep, Dave!) and so once you pump some water over the the hot water heater (never turn on the heating element until you confirm it has water in it via the hot water tap!) your freshwater tank drops by the corresponding amount.  So really, I have more like a 25 gallon fresh capacity.  So how do you handle that?  Well, I suppose you could do that at the water station if no one’s waiting, but this would be a slow process.  What I did–and prefer to do–is take along a 7 gallon jug.  Fill that at the water station after you’ve filled your fresh tank and then pour it in via funnel after you’ve filled your freshwater tank.

We also found that even without using the shower, we tore through freshwater like…well, water.  Yet we knew that all the literature warns against draining the black tank before it’s 2/3 full.  So…at some point it was clearly necessary to “top off” again with the jug and funnel.  That way we were sending enough water down the black tank via the toilet.  You could always just pour water down the toilet too.

Oh, and another thing I remember from my flying days.  My flight instructor used to say FAA requires that general aviation aircraft fuel gauges register full when the tanks are full, and empty when the tanks are empty…but can pretty much read whatever they want in between, so that’s why we measure fuel consumption through flight time rather than relying on gauges.  I never bothered to check the veracity of that story, but it also seems to fit RV water tank gauges.  Bojack has digital gauges that show tank capacity in thirds…and I think sometimes it’s more of a random light generator than a gauge.

We didn’t use the city water connection since we didn’t have any water hookups, but I’ll share a few tips I’ve picked up from others for water hookups.

If you’re on city water you won’t need to run your water pumps; let the water pressure do its thing!

Now for the goofs.  Newbie mistake right out of the gate.  Since even our 19 gallon water tank would add nearly 160 pounds of weight forward of the axle on the RV, my concept of operations is to haul empty as long as I can.  Since Chatfield State Park had a very nice combination dump/water station at the entrance, it was easy to wait until we got to the park to fill up.  And we did.  However, leaving the dump station and driving the mile or two (at slow speed) to our site, I heard a very strange dragging sound.  I really should have stopped immediately to investigate, but we both chocked it up to “it’s heavier now so it’s probably just increased hitch noise.”  Well, it was…but much more nefarious.  One bar from our stabilizer hitch had fallen from the ball and was being dragged by the chain.  So, lesson learned?  Check and recheck all connections after a significant change in the weight distribution.

The other goof was less of a mistake and more of just an RV thing.  I was outside the RV and heard Patricia startle.  The aerator and elbow from the faucet had popped off and water was now leaving the faucet horizontally!  The set screw almost certainly ended up in the gray tank, and we simply had to make do by not running the faucet all the way open.  I’ve since replaced the set screw, but that’s hardly the kind of part you’d expect to travel with.  Fuses, sure…but a faucet set screw?  I’m confident in my work, but there’s now a spare in the RV nonetheless!

Dumping was remarkably uneventful.  Anyone who’s seen the movie RV with Robin Williams breathes a sigh of relief with every uneventful dump.  That said, the Class A that had been at the site behind us came into the adjacent dump lane while we were setting up our dump hose.  He opened a side panel to his water pump system and was met with a brown tsunami.  The smell wave struck seconds later.  After some knob turning and a wash-down with a cleanup hose, he looked over to us nonchalantly and shrugged, saying “it’s part of RVing!”  I sure hope not, but I can’t help but imagine some day my number will be called to join the ranks of the dump station casualties…