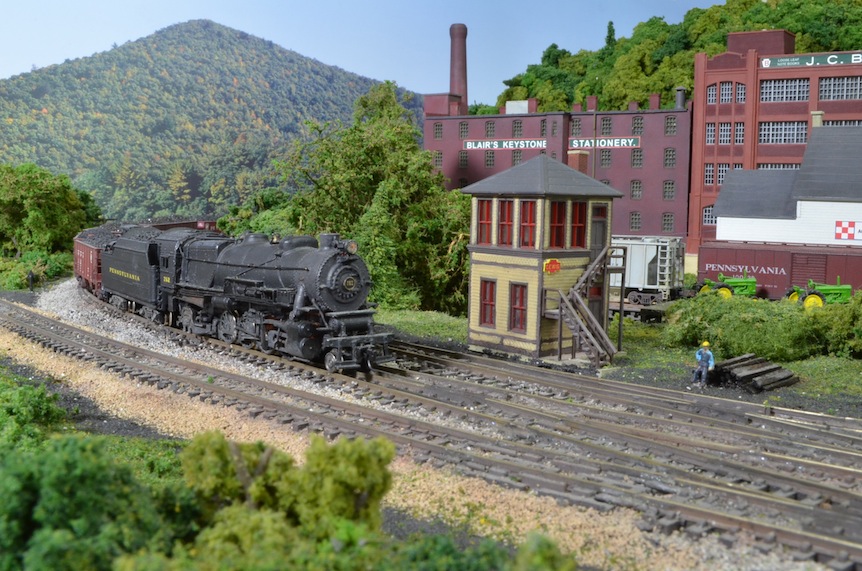 I just got the formal contract from Model Railroader for the Great Model Railroads 2014 article, so it looks like a go. Now’s a good time for some reflection. So, here are some of the lessons I’ve learned:

1. Using someone else’s trackplan is fine, but basing your model scenes on another model railroad can lead to disappointment and drift away from prototype fidelity. To wit:

Although I used Lou Sassi’s trackplan I based a lot of scenes (like the tall retaining wall at Spruce Creek) on Dave Frary’s 1993 HO Pennsy Middle Division layout. It was a great layout for what it was meant to be, and Dave Frary was/is a great modeler. It certainly felt like Pennsy. But it was in many was impressionistic and not entirely faithful. My scenes based on his were likewise impressionistic.

2. No amount of scenic trickery can make the Pennsy’s 4-track Broad Way of Commerce fit on a standard hollow-core door.

Well… maybe in Z scale. But not N. So, no matter what I’ve done to improve the prototype fidelity like better signals, new structures, taller trees, etc., it will never be more than a caricature of the real thing. I knew this going in, and I also know that at any time I can swap out some structures and declare the layout to be a lesser Pennsy mainline like the Northern Division or York Haven line. However, I will forever be smitten by the almost mythical might of the Pennsy’s 4-track main, so I made a huge compromise. Most days I’m okay with that, but every now and then I dream of a basement-sized around-the-walls version centered on Lewistown where the 4-track mainline is present in its full glory, and a steady parade of PRR trains roll past the venerable depot while the Lewistown local works its way toward the Standard Steel plant up the valley in Burnham.

I would love to get into running a railroad like the real thing., but I’m also a lone wolf So clearly, when one looks at Lesson #2, I’ve already shot myself in the foot. No one guy can operate the level of traffic that choked the 4-track main in the mid 1950s, and I don’t have the staging space or the trains to do so. Even if I were to divide by half (to account for two missing main tracks on my layout) I would be quickly overwhelmed and overbudget. So, in the end, I tend to be a roundy-rounder. And that’s OK… for now.

4. Over the last decade, Pennsy has gotten orders of magnitude easier to model.

In spite of the perennial braying about the lack of N scale Pennsy steam, there are so many prototype and near-prototype models available for Pennsy in most of the major eras that it’s one of the best represented roads in N scale. I know a lot of PRR N scalers that will disagree with that statement, but thinking subjectively about the other roads I like (Colorado Midland, East Borad Top, Reading, Bellefonte Central, among others), modeling the Pennsy is almost effortless. Couple that with the enormous body of research material readily available and it’s a breeze. You can’t swing a dead cat without hitting a Kato GG1, and it seems Micro Trains puts Pennsy on at least one car every other release. Signature cars like N5 cabins, H21a and GLa hoppers, and X29 boxcars are still available all over the place.

5. I’m still dumbfounded by how popular the Juniata Division is.

At this posting the Juniata Division’s Facebook page has 440 likes, and the last photo I shared was viewed by over 2,000 people. I get e-mails all the time from people who have stumbled on my WordPress site and who love the layout. It’s funny to me because I see the warts, whereas others only see what I let the camera show them. They don’t see the lifting, warped styrene parking lot at the new paper factory, the minor kink in the one curve that causes wheel slippage on certain steamers, the ground foam embedded on the river surface, my perpetual war on dust and fading… Nothing I did on this layout was in any way groundbreaking. I’ve done nothing that hasn’t been done before. It’s just a double racetrack on a hollow core door, and even then, it’s someone else’s project railroad trackplan. It was only ever meant to be a placeholder until my nomadic lifestyle switches to a more permanent one. Don’t get me wrong, I’m generally pretty proud of most of my work, and I’m very flattered by the attention it gets, but I’ve never been very comfortable with compliments. All I can say is thanks for all of the great words people have shared with me about the Juniata Division, and I hope my work always lives up to your expectations. Which is a great segue to Lesson #6.

6. I hope I have not established unrealistic expectations for others.

I’ve wrestled far more from the original door layout plan than I ever should have. But that’s not to say such a strategy will work every time. Lou Sassi’s plan is not readily translatable to every situation, and neither is it always (or often) advisable to attempt massive mainline railroad infrastructure in the space of a hollow-core door. For example, I would never try to fit Rockville Bridge or Horseshoe Curve on the door because gargantuan size is such an integral part of both scenes. The scenes I’ve modeled (Spruce Creek, Lewistown) are much more manageable, and even then, I’ve applied so much selective compression they’re only marginally recognizable. In 2′ x 6’8″ I’ve added what is essentially a tiny little yard, but called it Enola. Enola was, in the era I model, the largest railroad classification yard on the planet.

That’s kind of the problem with PRR… Everything tended to be the “largest, longest, heaviest, busiest, widest, etc….” on the planet. The very things that attract me to the PRR are what make it so hard to do in such a small place.

If you’re playing along at home and didn’t TL;DR, I’m very pleased with what I’ve been able to do in spite of my mobile military lifestyle. I recognize the Juniata Division’s shortcomings. I fix those I can and accept, if begrudgingly, those I cannot. Someday almost assuredly it will be recycled, and every tree, telephone pole, and plastic citizen will find itself on another iteration of the Standard Railroad of the World…one that will be so much better because of the countless lessons I’ve learned from the Juniata Division.